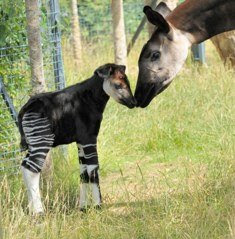 A major event for me at the zoo yesterday – I finally got to see (briefly) our new Okapi calf. She was born only a few weeks ago and still spends most of her time lying down in her mothers stable, out of the view of the public, but does venture out occasionally.

Okapis are of course the most distinctive living member of the giraffe family (readers who think there is only one species of long-necked giraffe are mistaken – there are several), and was only discovered by western science in the early 20th century. Before a specimen was obtained it was thought to be a surviving Hipparion (an extinct, 3-toed member of the horse family), but once research material was obtained it became clear it was a giraffid.

Live Okapis were first imported to Europe in 1918, but at first the stress of capture and transport by ship resulted in high mortality. Bristol Zoo received the first Okapis in 1961, and was the first zoo in the UK to breed them. Since the first arrival, we have bred over 30 Okapi, and both our current adults - Rubani the male and Lodja the female – are descendents of these first Bristol animals. The worldwide population in captivity outside Africa today is only 143, with 11 births in the last twelve months (including ours), plus some in captivity in the Republic of Congo.

Okapis our secretive and solitary in the wild, so they are hard to study. The diet comprises mainly leaves, with some fruits on occasion, grasses, or even fungi. As browsers, one might think that a tropical forest would provide abundant food, but in fact most rainforest plants protect themselves with powerful toxins, and a large animal has to travel far to get sufficient non-toxic plant food. To compensate to some extent for the poisons they consume, wild Okapis eat charcoal from lightning-struck trees and eat mineral-rich mud. Females are larger than males, and most of the time are dominant to them which means they get the best food. Even so, spare resources for growing a baby to term are in short supply, and Okapi pregnancies are consequently long – just under 15 months.

Newborn okapis spend a lot of time resting up in thickets. To avoid the smell of their faeces attracting predators such as leopards, okapi babies have an odd habit of waiting many days after giving birth before beginning to produce dung – as long as 41 days has been recorded at Bristol, although it has been as little as 8 days with other births.

The calves grow fairly fast, and after are full grown at three years.. The lifespan of an Okapi can be as long as 30 years in captivity, although 15 – 20 is more typical.

The main threat to the wild population is the bushmeat trade and deforestation. The current wild population has been estimated at about 20,000 animals, but the constant war in the Congo means that these figures may be very inaccurate.

(Photo from Bristol Zoo website)
Posted by Alan at 11:02