Land of the Dodo 12: The White-eyes 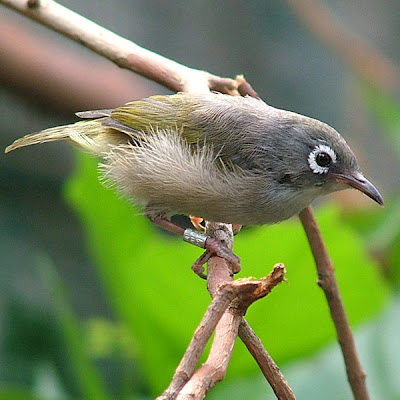 Scattered on most of the islands of the Indian Ocean, Australasia, and the pacific, as well as the mainland of Africa, and Asia is a huge group of small passerine birds, the White-Eyes, Zosterops. There are currently over a hundred species, with more being described each year. One would think that such diversity is a sign of a long history, but in fact the genus seems to have originated only a few million years ago. This makes Zosterops one of the fastest evolving vertebrate groups, about as fast as the well known cichlids of the African Rift Valley.

The reason for this rapid expansion is not altogether clear – separate species have evolved even on islands separated by only a few kilometres. This would suggest a species that does not move far, which is contradicted by the rapid spread of the genus as a whole. It appears that part of the reason is the short generation time and the tendency of the species to move around in flocks, which means that either large numbers of colonists arrive at a new location, or none – there is no steady “drip” of genes travelling from the source to the founder population.

White-eyes are fairly generalist small passerines, behaving in many ways like the leaf warblers Phylloscopus found across temperate Asia. The plumage is usually yellow-green, with a distinctive white eye-ring, which is where the name comes from.The main diet is insects, supplemented by fruits and nectar. The nest is an open cup made of grasses and moss, and the clutch is usually 2- 4 eggs.

There are three or four species surviving on the Mascarenes, living on Mauritius and Reunion. None are known from Rodrigues, but this may mean that they died out before being recorded. It appears that they are closest to the Asian White-eyes, although other Indian ocean islands have been colonised from Africa. 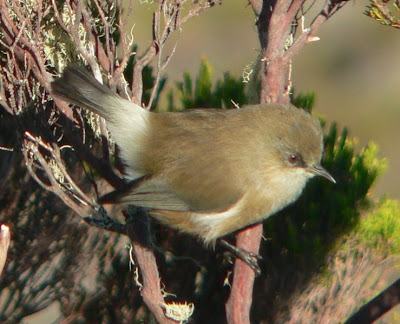 The Grey White-Eye is found on both Reunion and Mauritius. Depending on the taxonomist, the two islands are either home to a species each (Zosterops borbonicus and Zosterops mauritianus), or they are united as subspecies of the Reunion Grey White-eye shown here. Both forms are fairly distinctive, having lost the yellow in their plumage and also the white eye-ring, but in their behaviour they are typical white eyes. Both species are still common, probably because they are adapted to disturbed habitats such as man-made clearings.

Far more distinctive, and in more trouble, are the two species of Olive White-Eye. The Reunion species, Z.olivaceus, is allegedly still common, at least at higher elevations, but the Mauritius Olive White Eye Z.chloronothus (shown at top) is critically endangered, and is restricted to only 25 square kilometres on the mainland, with perhaps only 100 pairs. With a species with such a short lifespan this means that only 2 bad breeding seasons could result in its extinction, so strenuous efforts are being made to enable its survival, in the form of regeneration of native forest and captive breeding attempts. Some have been released on isle Aux Aigrettes, but until recently there had been no successful nesting. However, in October 2008 for the first time 2 young were fledged on the island.

The problem the Olive White-Eyes have is that they have become specialists. Unlike their adaptable ancestors, they have become specialist nectivores, feeding mainly on the nectar of native plants. With the widespread habitat destruction this has resulted in a loss of their food source, with inevitable results. Experiments are being made with supplemental feeding – as many in America who feed hummingbirds know, nectar feeding birds will often take to artificial feeding stations. The main problem is that nectar feeders tend to be territorial around food sources, so any feeding stations have to be widely scattered, which takes a lot of upkeep in difficult terrain.