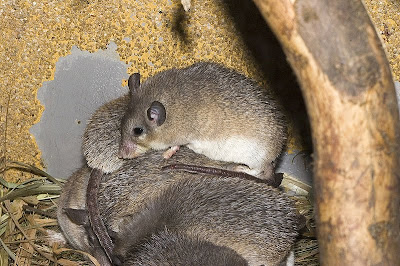 On view in Twilight World here at Bristol we have a group of interesting small rodents, the Turkish Spiny Mice Acomys cilicicus. Several UK zoos hold this species – Bristol has 75 (at last count!) and there are over 600 in UK zoos in all. The reason there are so many being kept is that the species is believed to be rare and possibly endangered in its homeland – at present it is only known from the type locality.

Spiny mice are an interesting group of rodents, with 20 or more species, mainly in Africa but some extending to the Greek islands, and, of course, Turkey. They are chiefly desert, or savannah woodland animals, and get their name from the bristly coat. It is believed this helps with heat regulation – the bristles would certainly not be an effective defence against predators.

Although long believed to be related to the murine rodents (house mice, brown rats and their allies) it now seems that the spiny mice belong to a separate group more closely related to gerbils, along with a few other African genera of rodents. Their reproductive biology is certainly different – instead of large litters of naked young, spiny mice produce small litters (2 – 3 in the case of A.cilicicus) of young after a fairly long gestation period of 5 – 6 weeks. The young are precocial, being born fully furred and with eyes open, and leave the nest when only a few days old. The life span is fairly long – up to 5 years although 3 – 4 is more usual.

As with most small desert rodents, spiny mice are omnivorous, feeding on seeds, flowers, plus some insects. The natural enemies would be cats, weasels or other small mammalian carnivores, birds of prey, and reptiles, especially snakes, although they are extremely alert and fast moving animals and I suspect from their fairly low reproductive rate that mortality in the wild is less than for similar rodents. They are good climbers, and will frequent bushes and rocky slopes as well as feeding on the ground. They do not seem to make nests – in the hot climates they prefer insulation is not really needed, and their habit of sleeping in groups (they are very sociable) means that even a cold night will pose few threats.

In captivity they need to be kept in groups – given sufficient space even multiple male groups work – with plenty of opportunity to climb. They need to be kept at least at room temperature – lower temperatures (below 15C) can stress them severely. In captivity the diet is a standard rodent mix with some added animal protein in the form of mealworms.

Some species of spiny mice are in the pet trade. The one usually seen is the Egyptian Spiny Mouse A.cahirinus, although the Golden Spiny Mouse A.russatus is also sometimes seen. They do not make especially good children’s pets though – they are a little inclined to nip and they move like lightening, which makes catching one when they get out a bit tricky. They are also good at chewing through plastic hamster cages – a large glass aquarium design is best.

Aside from the Turkish spiny mice most species from the mainland are not considered endangered, but the situation is different on the Greek islands. The Cyprus spiny mouse A.nesiotes has not been seen for many years and is believed extinct, and the Cretan spiny mouse A.minous is considered threatened. The reasons for the decline is probably an increase bin the human population, and even more cats, plus changes in land use reducing suitable habitat. One issue yet to be resolved however is the status of these endemic species – they are very similar to the widespread A.cahirinus and in view of the known tendency for rodents to hitch hike on ships from the earliest times, their must be a possibility that they reached the islands quite recently, possibly as a result of Greek or Roman shipping.

(Picture from Wikipedia)
Posted by Alan at 01:54