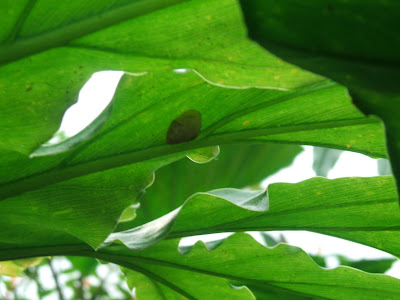 Look under the leaves of the plants as you enter the Bristol Zoo butterfly house and you may see a small, whitish snail clinging to them. These are not just any snail – they are some of the last of their kind. In fact, they come from Moorea in the Pacific, and rejoice (?) in the name Partula tohiveana.

The last fifty years or so have been a disaster for a huge number of the endemic snails of the Pacific islands. As is usual in these circumstances, human beings are to blame, in this case initially by at first deliberately, and then accidentally, spreading the Giant African snail Achatina Fulica (these will be found in many pet shops in the UK these days – and even more jam jars at school).

Following the disastrous spread of Achatina snails, the real ecological disaster occurred. In a botched attempt at biological control, the Rosy Wolf Snail, Euglandina rosea, was introduced. This predatory species feeds on other snails in its native Florida, and the idea was that it would feed on the Achatina. There was only one hitch – Euglandina does not like to eat Achatina snails of any size, and as it only grows a few cm long and Achatina regularly grow to a length when extended of over 15cm and a shell the size of an apple, the experiment was a failure. What Euglandina chiefly preyed on was the various species of Partula wherever it went, with the result that of the hundred or so species, fifty-one are now completely extinct and a further eleven are extinct in the wild and only survive in captivity.

The cause of the heavy extinction rate was the Partula snails’ uncommon reproductive habits. Partula snails are live bearers, with a very low reproductive rate of only a single offspring at a time and perhaps no more than 10 or so young a year, which for an invertebrate is incredibly low. This meant that when an adult died so did its unborn offspring, with no egg masses buried out of harms way to produce a new generation.

The mass extinction was not confined to species of Partula. Most of the Pacific islands are infested with Euglandina, including Hawaii, where numerous species of Achatinella are either extinct or critically endangered.

Here at Bristol we currently hold 6 species of Partula. As of the end of 2008 the inventory was as follows:

You can see them in Bug World, where they are kept in aquaria (sealed with clingfilm to retain humidity, and are fed on a paste of Nettle Leaf powder, trout pellets, rolled oats , cuttlesfish bone, and added vitamins. This duplicates their natural diest, algae growing on the leaves and trunks of rainforest trees.

We have been quite successful in breeding some of these species here at Bristol, with the result that we have had sufficient spare stock to release in the Butterfly House as a field test. They are hard to spot, but if you look carefully you may find them living in as close to a wild state as they can get. This is an experimental programme – different species might respond differently to the vegetation for example – but potentially this could be a useful technique for insect conservation. Butterfly houses are widespread, popular, and fairly cheap to create, so they are a good resource for ex-situ conservation of those insects that never get a look in at more conventional zoos.
Posted by Alan at 11:13