Butterflies of Bristol 9: Not exactly a butterfly 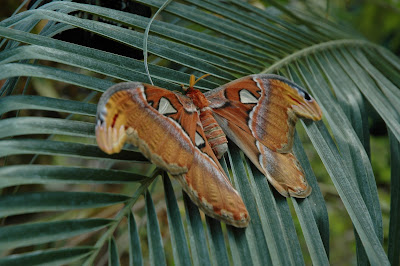 Not butterflies of course, but among the most spectacular of the Lepidoptera, two silkmoths (family Saturniidae) are regularly on show here at Bristol. The most spectacular, and one of the largest of all insects, is the Giant Atlas Moth, Attacus atlas. We currently have some adults on show, but unfortunately the adult phase of the life cycle does not last long – 7 to 10 days at the most. This is because, unlike butterflies, silkmoths do not feed as adults – their mouthparts are non-functional and they instead rely on the fat reserves they built up as larvae.

Silkmoths get their name because they are related, although not as closely as once thought, to the true silkworm Bombyx mori. Now split into a separate family Bombycidae, the silkworm is probably the most economically (and in history politically) important insect in the world. The silkmoths produce a coarser grade of silk than the silkworm, but many species have been used for commercial silk production nonetheless, especially in India.

The Giant Atlas moth is one of at least 60 different species of Attacus, spread from India to Australia. A.atlas itself has a large range all through South East Asia, but many of the other species are endemic to small areas and are potentially at risk from habitat destruction. Atlas moths are mostly reluctant fliers, especially the egg-laden females, so there is a strong tendency for local forms to evolve.

Large insects are a major food source for many animals, so the Atlas moths have several camouflage tactics. Large transparent panels in the wings show vegetation behind the moth, so breaking up its outline and making it look like dead leaves, which the rusty brown wing colour also helps with. The tips of the wings are marked to look like the head of a snake (in fact the Cantonese name translates as Snakes Head moth). This is probably especially important when the adult first emerges and has not yet completed expanding its wings as a deterrent to birds.

Almost all silkmoths are on the large size, and the Atls moths take this to extremes – even the smallest of the genus, the Australian A.wardi, has a 17cm wingspan. The large size means a large and voracious larva, and sometimes Atlas moths are regarded as pests – in fact some US states have banned their import to be on the safe side. As a result, it is common for the larvae to strip the original food plant of all edible leaves. It is probably for this reason that Atlas moth larvae are polyphytophagous – that is to say the regularly switch food plants. This is unusual – most lepidopteran larvae have very specific food plant requirements and remain on the original species that the egg was laid on throughout the larval period. Atlas moth larvae feed on whatever is available, with the result that the Natural History Museum database records 7 pages of food plant records. For a detailed list, see here http://www.nhm.ac.uk/jdsml/research-curation/research/projects/hostplants/index.dsml) 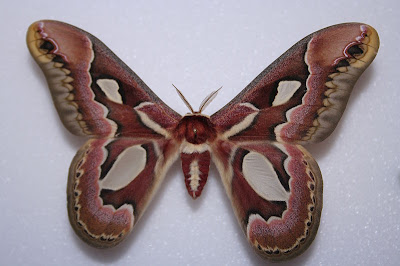 The other species of silkmoth that may be seen at Bristol is a South American form, Rothschildia jacobeae. This is similar in patter to an Atlas moth, but comparatively small – about a 15cm wingspan.

Many silkmoth larvae are ornamented with bristles or horns, probably to deter predators, and some species can be quite toxic – the various Automeris species of North and South America can cause violent allergic response in some people for example.

The silkmoths get their name of course from the silk cocoon that most species spin at the end of the larval period. Some however bury themselves in the ground, and in these the cocoon is very week or absent. Atlas moths usually incorporate leaves into the cocoon, thereby increasing the camouflage. Once the larva has changed into a pupa, it rests until the following season. Most species then emerge the following year, although there is often a small group of pupae which wait two years to emerge. This is probably a protection against a single bad season destroying a population.

Many species of silkmoth are fairly easy to breed at home, and I have done so myself on several occasions. For most species a net cage at room temperature is all that the larvae require, although species like the Atlas moths (which we have bred at Bristol) require more heat and humidity. The most important step is ensuring that you have enough of the food plant to raise the number of larvae – it is therefore strongly advised that beginners do not attempt to raise more than 12 larvae at once. Eggs of many species can be obtained through the mail from supply houses. As an activity for children it is great fun and would make a good display for a school nature table, so long as there was appropriate adult supervision. 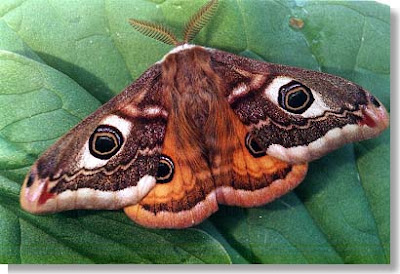 There is only a single species of silkmoth in the UK, the Emperor Moth Saturnia pavonia. This is found on heathland, where the larva feeds on heather and blackberry. The flight time is between March and June, depending on the local climate. It over winters as a pupa and emerges the following year. The Emperor moth is the mostly widely distributed of the palearctic saturniids, with a range from Siberia to northern Spain.