Butterflies of Bristol 8: The Swallowtails 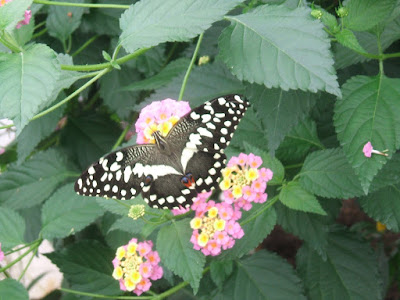 One of the most popular groups of butterflies to be seen in butterfly houses worldwide is the swallowtails (Papilionidae). Mostly medium sized to large butterflies (the Queen Alexandra’s Birdwing, Ornithoptera alexandrae is the largest of all butterflies, with a 30cm wingspan), they are also strong fliers and so make a good display. They are not usually true migrants, but they can stray long distances sometimes.

Swallowtails are grouped together by a distinctive feature of the larva, called the osmaterium. This is a forked structure that can be extended from the thorax of the larva and has a deterrent scent. The larva when disturbed will produce this and flail about to deter potential insect predators – although the frequency with which they are parasitized suggests this is not a very effective technique.

Depending on the time of year, a variety of species may be on show, from both Africa and South America. Most of them will belong to a group informally referred to as the “Citrus Swallowtails”, because the larva mostly feeds on Citrus or other members of the Rutaceae. The group is not a natural one however – it appears that feeding on Rutaceae is a basal trait amongst species of Papilio, so the common food plant does not imply a particularly close relationship. Among those on show from east Africa are Papilio demodocus , P.dardanus,P.demoleus, P.constantinus and P.nireus .

From South America we have the Giant Swallowtail, P. cresphontes, which has a huge range extending north into Canada.

The East African species mostly have ranges throughout Africa, and the Green-banded Swallowtail P.nireus is probably ancestral to the Reunion Swallowtail P.phorbanta.

Many of these butterflies breed in the house (we have some larvae on show at the moment) and they are fairly easy to raise on substitute food plants (we use Choisya). The larvae are distinctive when young, as they are black and white and mimic bird droppings (probably a better defence than the osmaterium). Larger larvae turn green for camouflage against the leaves. Unlike the pupae of nymphalids and pierids, swallowtail pupae are “head up”, and held in that position by a single hammock of silk spun by the larvae before pupation. 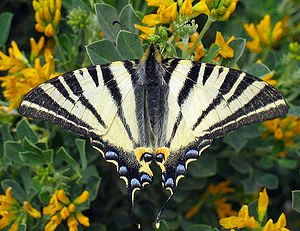 The other group of swallowtails on show are the Kite Swallowtails (Tribe Leptocercini) are a group of genera with a mostly southern hemisphere distribution today. There are about forty known species in four genera in South America, and over 70 in another three genera in Europe, Africa, Asia and Australia, with the bulk of the species in the large genus Graphium. The species we have on show here at Bristol is the White Lady Swallowtail, Graphium angolanus from East Africa. Unlike the species of Papilio mentioned above, the food plant of G.angolanus is the Custard Apple, Lfp Annona, together with other Annonaceae.

Although the various Kite Swallowtails are mostly tropical, two species extend to temperate climates in Europe and Asia. The European species, Iphiclides podalirius, is called the Scarce Swallowtail in English, as it was in the past reported from Southern England occasionally (see picture above). The range extends into central Poland, so it can tolerate cold conditions, but the British examples were almost certainly vagrants rather than a breeding population. The British climate is probably too wet for the larvae to successfully mature most years, although it feeds on several common British shrubs and trees, including hawthorn and blackthorn.

Only one species of Swallowtail is found today in the UK, the British subspecies P.machaon britannicus of the widespread (extending to the US) Papilio machaon. Unlike the common Continental subspecies P.m 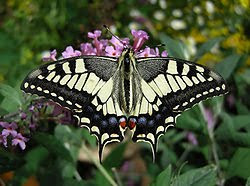 achaon gorganus, which can be seen everywhere around the Mediterranean and feeds on a variety of plants of the carrot family Umbelliferae. The British species is adapted to a marsh or fenland habitat and is dependent on a single food plant – Marsh Hog’s Fennel Peucedanum palustre. The British race has been reduced by changes in land use (especially drainage of the fens of Norfolk which is the only place it is now found), but has staged a recovery with improved protection of the habitat. The European subspecies sometimes reaches southern England and has been known to become briefly established for a few years at a time before dying out – it is a potential colonist across more of the UK in the event of climate change.