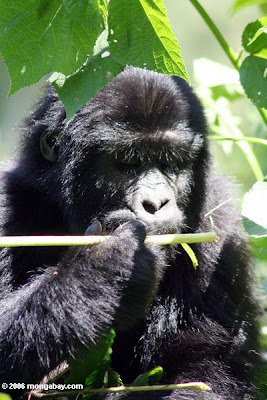 Ask a member of the public what gorillas eat, and they will say bananas. As with most things you everyone knows however, this is not the whole truth. As two species occupying a vast area and many different habitats, the diet of gorillas is in fact highly varied.

The bulk of a gorillas diet comprises not fruits, but the leaves and stems of herbaceous plants. One might think that these are easy to obtain, but in fact eating leaves is often the riskiest way to make a living. The problem is that plants protect themselves with a variety of defences, both physical (thorns, stinging hairs and so on) and also chemical defenses in the form of poisons or highly distasteful compounds such as resins or tannin. Investigators who have tried tasting the leaves and plant parts eaten by gorillas usually report that they are extremely bitter or resinous to the taste.

As a result, gorillas (and other forest leaf eaters) often have to travel long distances to locate plants they can eat. Many of these may taste best only at certain times of the year, and as a result gorillas eat a huge variety of plant species – up to 180 species have been reported as being eaten by one population of Western Lowland Gorillas. Popular food items are bedstraw (Galium), wild celery, nettles and bark.

Mountain Gorillas in Virunga live at altitudes where the variety of plants is much reduced, and as a result the list of plant species is shorter. The bulk of their diet in fact consists of bamboo shoots, which they are strong enough to break of the plant even though the stems are as thick as my wrist.

Fruit is eaten by gorillas when they can get it, especially by Western gorillas which live in more productive forests, but the percentage is always less than for chimps. The large size of gorillas, especially the silverbacks, limits their ability to reach the outer branches where most of the fruit is.

As with chimps, gorillas are fond of insects, especially some species of ants. The preferred species appear to be rich in iron, and it has been suggested that this may help in the detoxifying of plant poisons in their livers. Mountain gorillas do not have access to these, but instead eat iron-rich mud at various traditional sites. Earth eating is common among many vegetarian rainforest animals, and even birds such as macaws will eat earth to help them with toxins in their diet. The microscopic structure of the clay also absorbs plant toxins before they are taken up by the gorillas’ digestive system.

As well as food, plants also provide gorillas with medicine. Both chimpanzees and gorillas specifically seek out certain plants they otherwise avoid when feeling unwell, and have a highly standardised way of selecting and consuming the pharmacologically active part of the plant. Gorillas in the wild often carry a high load of intestinal parasites, and certain leaves may be carefully prepared and then swallowed whole – the hairs on the leaves tarp the worms and take them out of the body.

All of this has implications for the diet of captive gorillas. Most gorillas are fed a variety of commercially grown fruit and other produce, in many cases supplemented by a commercially produced biscuit. The problem is that commercial fruit is nothing like the wild fruits eaten by gorillas. Just compare a bite from a crab apple with an apple from a supermarket, and you can see what domestication can do to a plant. Humans have a sweet tooth, and we have bred our fruit over thousands of years to be high in sugar and water, and low in protein and fibre – the exact reverse of a wild fruit. Feeding commercial fruits to fruit eating rainforest animals is probably a main reason why captive primates of all sizes are prone to obesity and tooth decay.

As a result, most zoos are re-thinking their diets for gorillas, reducing the amount of fruit and increasing the amount of leafy vegetables and browse. Here at Bristol for example, gorillas get celery, leeks (of which they are very fond), leafy greens and cut branches among other things. They are also fond of herbal tea!
Posted by Alan at 09:54