Land of the Dodo 7:Going Batty 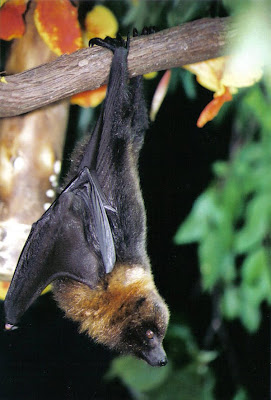 When first colonised, the Mascarenes were home to three species of fruit bat and at least three – possibly more – species of microbat. One of the fruit bats, and at least one of the microbats, is now extinct. The other microbats are doing well, but the two surviving fruit bats are both much reduced in numbers and range.

Traditionally, bats have been divided into two groups, the fruit bats or megabats, confined to the Old World, and the microbats, which have a worldwide distribution. The main reason for this is that the old world fruit bats do not use echolocation in the same way as microbats do, and it was believed that this may even have been because they were not closely related to microbats, possible having developed flight independently. It now appears that this distinction is inaccurate, and the most basic division in the bats is between a group containing the megabats, horseshoe bats and their relatives, and all other bats. Interestingly, horseshoe bats wrap their wings around themselves when at rest as do megabats, whereas in other species the wings usually are held at the sides. In the Americas, many species of microbats also eat fruit.

Fruit bats are important pollinators (despite their name, they are fond of nectar) and also dispersers of seeds. A lack of these is a major cause of delays in regeneration of cleared tropical forests world wide, and it has been shown that encouraging fruit bat population helps considerable in restoration of forest cover.

Unfortunately, fruit bats and people have very similar tastes, and as a result in many parts of their range they are persecuted as crop pests. Recently the Mauritius government authorised a cull of one of the surviving species, the Mauritius Fruit bat, despite the estimated population being only 20,000. This has now been halted pending further investigation of the status of the species.

On Rodrigues, there were at least two species, the Mauritius Fruit Bat and the Golden Bat (Photo of Golden Bat at head of this post – image from Lubee Bat Conservancy). Only the Golden Bat survives, although it formerly bred on Mauritius as well. It is seriously endangered, with a world population estimated at 5,500, which is still a great improvement on the case in the 1970’s, when it was down to 150.

Sadly extinct is the smallest and most widespread of the three fruit bats of the Mascarenes, the Rougette. Possibly most closely related to the surviving Seychelles Fruit bat, it lived in large groups in hollow trees. This is unusual for fruit bats – most species roost on open branches of tall trees. It was this habit that may have caused its extinction – they were easy to capture both by people and introduced monkeys, and deforestation would have removed roost sites.

The insectivorous microbats on the islands seem to have survived better, with the exception of one species on Reunion, the Pale House bat. This may have gone extinct for the same reason as the Rougette – it seemed to have had similar habitat preferences. Most of them have close relatives in Madagascar, Africa or India. People tend not to think of bats as migrants, but many can travel long distances over water – there is a record of a Little Red Flying Fox which managed to reach New Zealand from Australia.

There are several institutions which hold Golden Bats. Bristol formerly held a non-breeding group, but these have gone to other collections. They are often quite active by day, especially in the afternoon. Bristol currently holds a breeding group of Livingstone’s Fruit Bat, which I will blog about another time.
Posted by Alan at 04:15