Land of the Dodo 6: Lizards by night and day 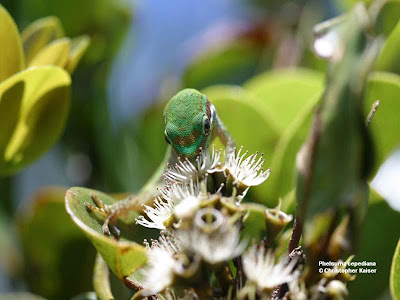 Before contact, the Mascarenes were home to at least 24 species of lizard in six genera, and they occupied all habitats from rock crevices to the canopy. They can be divided into two groups – the mostly terrestrial and insectivorous skinks and the climbing (on trees or rock surfaces) geckos.

There were seven different species of skink on the various islands, of which four still survive. Extinct before even being described was the largest lizard on Mauritius, the 60cm long “Didosaurus” which is only known from subfossil remains and was probably wiped out by rats.

The most obvious of the lizards were the various species of day gecko, Phelsuma, of which there were at least nine. Four of these survive, and are important to the native plants as they are fond of nectar and are important pollinators. . One of the surviving species, the Blue-Tailed Day Gecko of Mauritius, is at the head of this post (picture from MWF website). At Bristol we have two species, both from Madagascar where the genus probably originated and which has most of the world’s species. Unfortunately, the survivors do not include the most spectacular gecko of them all, the 1 metre long Newton’s Day Gecko of Rodrigues, which was a vivid emerald green

Much less obvious were the night geckos, Nactus, of which at least two species survive. These seem to have had a small radiation of species in the Mascarenes, after managing to colonise the islands from Australasia, where a few other species are still found.

All these lizards were important as food sources for many of the birds, especially the Mauritius Kestrel and the various endemic owls. They also dispersed seeds and pollinated plants as noted above.

Unfortunately, as well as the native wildlife these days the lizards have to cope with introduced competitors. House geckos (Hemidactylus) are widespread and compete with the native Night Geckos, and even introduced honeybees are competitors for nectar with the Phelsuma geckos.

Relocation efforts and reintroduction to offshore islets has been a great success, and for example the Telfairs skink Leiolopisma telfairii, which was restricted to Round Island, can now be found on Isle Aux Aigrettes and Gunners Quoin, where it is breeding well. This is important, since the larger skinks are omnivorous and are probably significant dispersers of the seeds of native plants

For further information (and some great pictures) look at the MWF website in the links section.
Posted by Alan at 10:43