Land of the Dodo 8: Birds of Prey 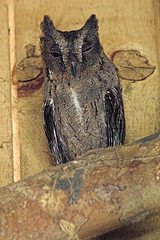 Prior to human contact the Mascarenes were home to six species of birds of prey, active by both day and night. Today only two species survive, the Reunion Harrier and the Mauritius Kestrel. The Mauritius Kestrel is particularly important as it is one of the best examples of what a coordinated approach to conservation can do with a highly endangered species.

Unfortunately extinct are all three of the three endemic species of owl, all placed in the genus Mascarenotus. Apparently most closely related to the widespread genus Otus, the Scops Owls (one of which reached the UK from Europe two years ago and actually held territory for a while), the Mascarene owls were larger, and had the long legs without feathers which usually indicate a specialist lizard feeder. Their distinctiveness is such that they may have originally evolved on the islands preceding the emergence of Mauritius. They were all gone by 1830 at the earliest. Shown here is a Madagascar Scops owl.

The image here is of a Reunion Harrier, Circus maillardi. These have a world population of fewer than 400 individuals and a low reproductive rate, although they are slowly increasing under protection. Unlike most harriers, they will hunt over woodland. Their original diet was probably birds, but today perhaps 50% of their diet comprises introduced mammals, including the ubiquitous tenrecs. Although now confined to Reunion, it formerly occurred on Mauritius and could potentially be reintroduced there at some point – there have been several successful reintroductions of birds of prey around the world (including the extremely successful reintroduction programmes for White-tailed Sea Eagle and Red Kite here in the UK) although as far as I am aware there have been no introductions of harriers so far.

Finally, we have two species of kestrel. The Reunion Dubois’ Kestrel is now extinct, but was similar in structure to the European Common kestrel Falco tinnunculus. Surviving reasonably well (and shown below) is the Mauritius kestrel, Falco punctatus, but it was a very close run with extinction.

The initial problem was deforestation, which by 1900 had reduced the population to about 200 pairs. The final disaster was DDT spraying for malaria, which eliminated all birds outside one small area, the Black River Gorges where it was not used. In 1974 the total wild population known was four birds, of which only one was a breeding female.

At this point an extensive support plan was put into effect. Wild eggs were harvested to create a captive population, and nestlings were supplementary fed. Removing eggs from an incomplete clutch of eggs often results in birds laying additional eggs, so boosting productivity. Nest sites were monitored and protected against raids by monkeys or rats. By 1994 nearly 350 had been released.

Today the Mauritius kestrel has a wild population of 800 – 1000 individuals, and has been downgraded from Critically Endangered to Vulnerable status. 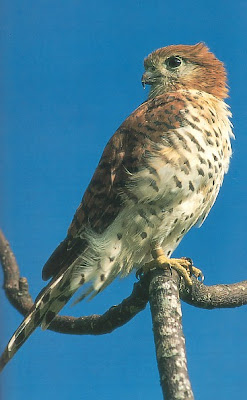